In 2016 Center for Council, in partnership with Zen Peacemakers, offered a Council training workshop in Sarajevo for a group of Croat, Serb and Bosniak peacemakers, organized by two dynamic Imams.
Turning toward suffering can take many forms. As a practice, it can seem counterintuitive and, to be wholesome, it demands skillful means, deep fortitude and compassion. The suffering of the Bosnian people is deep and profound and the events of twenty years ago are still tender and uncomfortable. Even now, excruciating memories are triggered by certain sites, uncorked stories, even turns of phrase. Despite the notorious “Bosnian humor,” an off-color and surprising proclivity for diffusing tension with dark jokes, there seems to be a longing for a real encounter with our common experience of suffering. So much there has gone unaddressed, unrestored, unmet… and a deep and embodied experience of coming together to grieve, release, celebrate feels emergent. Or so we imagined, as we designed a 4-day Council Training with an assortment of peaceworkers engaged in the complex and challenging work of rebuilding.

The Zen Peacemakers Order is deeply committed to building relationships and bearing witness in BiH. One offering was to help CIM train a cohort of its members in the practice of council. The thought was that council could be a useful tool for CIM’s work throughout the region, as well as a way to equip a local team to co-lead council circles throughout the Bearing Witness Retreat next year. Both Mevludin and Vahidin had experienced council in Auschwitz but, like Boris, they were curious about its relevance and applicability to a culture that had created, and was recovering from, historic unrest.​ 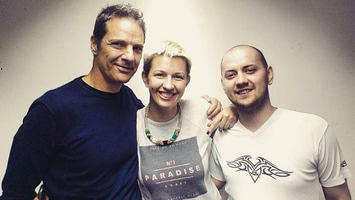 I was moved and honored to accept the charge of dropping into the field and introducing the practice, in partnership with a group of folks who had lived through genocide and were committed to healing their country and its diverse communities. I set forth with a strong intention to share this practice of council, tempered by awareness of my profound ignorance of the culture, conditions, relationships and language. I was blessed with an extraordinary partner in Jozo Novak, who has been studying council for several years and had grown up in the region, immersed in the culture and speaking the language.

And so it was our intention to enter humbly and listen deeply and to invite our friends there to try on the practice of council and experience how it might engage them, and they it. I began the workshop with a bit of a gimmick, admittedly – partially to diffuse some of the tension of expectations and the onus of being an “outside expert.” Before the group arrived, we assembled chairs in rows, placed a podium at the front of the room and began the workshop in the style to which so many had become accustomed, what the participants called “frontal learning.” After a few minutes of presentation, I asked the group to pause and say what they were noticing, what their expectations were, how they were experiencing their body/mind/heart/spirit as a result of this format. And then we shifted the furniture.

Working in a circle is, of course, a common practice for reconciliation work, but the careful and subtle awareness of what it feels like to be seen, included, “on-the-same-level,” open and connected would be revisited throughout our days together, taking on greater depth and subtlety. The councils that followed and the teaching about the essential elements of this practice reinforced the power of creating a container for deep presence, offering an invitation to let go of our expectations and judgments and to celebrate the opening of our hearts. As the stories came, the participants began to let down their guard and shed armor they were mostly unaware of. They began to see the impact of engaging our narrative as a generative act that leads to healing. And they articulated the emergent awareness that intimacy with our personal suffering is the key to being effective working with the suffering of our communities.

In addition to experiencing the variety of modalities of council, we talked about neuroplasticity and meditation, attention and self-regulation. I shared some metta practices and the brilliant work that Roshi Joan Halifax is doing around teaching compassion; her GRACE model is powerful and easy to practice. We talked about the “field,” inside and outside the circle, and liminality. We spent a great deal of time on identity; aspects of ourselves we present and those we hide and how that impacts relationships (as well as the work of council). And we played with forms of witnessing each other and the awareness of things waking up in us. It was powerful to hear Rumi’s poetry recited by an Imam: “Beyond right-doing and wrong-doing, there is a field; I will meet you there.”

The feeling of elation and inspiration by the last day was palpable. The participant who, Jozo and I agreed, put up the most resistance throughout the first day described an extraordinary journey through this work, perhaps more dramatic than the others. She spent an hour in the bar after day one, expressing her confusion and frustration and had to be convinced by Vahidin to come back the next day. She was frustrated to not see the methodology laid out clearly, to be asked to experience a series of weird sensations that were uncomfortable and to be groping for a tool that didn’t seem to make sense. She went home that night, she later explained, and spent two hours relating her day to her husband. She talked about the unusual, puzzling sensations and this new approach that was really unaligned with the expectation she had of learning about a new technique. Something was stirring in her that was new, peculiar, but it had her attention. Day two began to open the floodgates for her. She had hardened herself to her pain and closed off the part of her that could engage both her own story and her empathy for others. As her trust grew, her resistance abated; the council circle was encouraging her to soften, to move the energy, to turn toward the suffering. That night, apparently, the debrief with her husband went on for three hours, until her husband asked her to stop talking. And her take-away at the end of our time together was a sensation that she explained to us all was like nothing she had ever experienced: a lifting of a huge weight from her shoulders and cracking of a hard shell that left her feeling joy and deep love for the group that had listened so deeply and heartfully that she was able to “come back to myself.” The day after the workshop she posted online that she missed us all dearly and that she’d spent all morning explaining the “amazing 4 days” to her NGO coworkers and had convinced them all to come to a council circle she would facilitate for them shortly. Three other participants related stories of initiating council circles with peers and family.

In the end, I was left with immense gratitude. The commitment of ZP to foster this work in Bosnia and Herzegovina, the openness and embrace of the kind and caring Imams who run CIM, the passion and hard work of Roshi Frank de Waele of Gent Zen Sangha to organize and raise funds, the tender and powerful support Jozo brought to the circle… And what a blessing to experience the amazing and inspiring courage, rigor and resilience of this group of change-makers, living the healing that comes from a great intimacy with suffering and a devotion to opening the heart to serve themselves, each other and the healing of their community.
​
I am so excited to see how this work and this group continues to deepen. I hope you all will have a chance to bear witness with them in circle next year.

This Council Story was republished from the Center for Council website. Click here to read the full and original version.

Find awesome listings near you!